[mc4wp_form]
Insights and findings on marketing to seniors

Summary findings from a research study to examine current trends in contract offerings by communities, and to determine consumer preferences for those offerings. 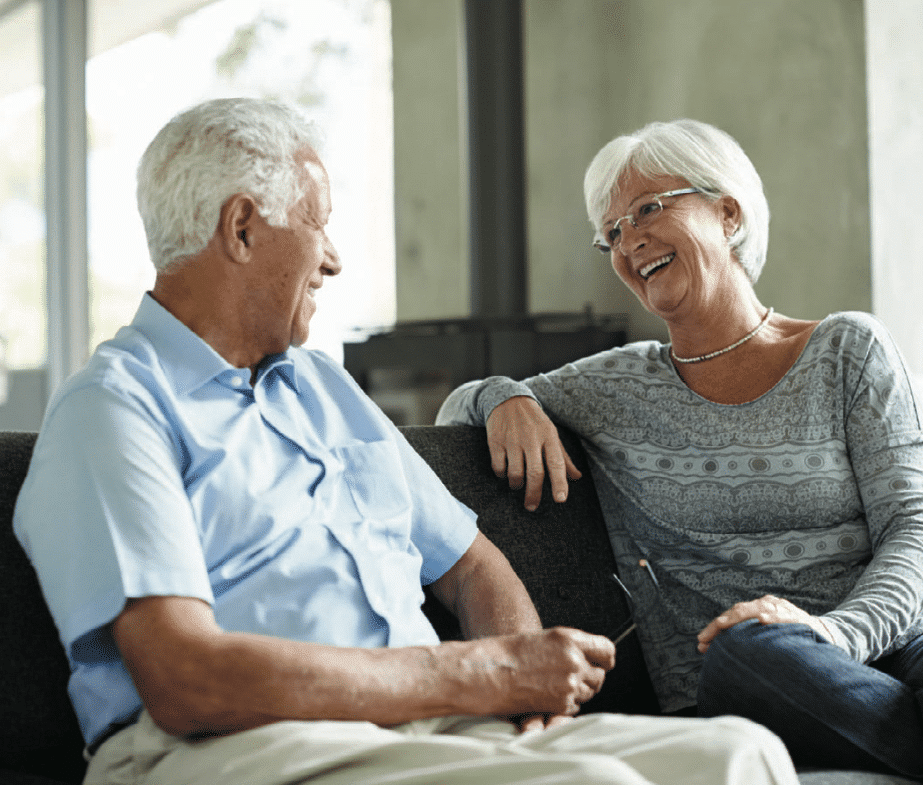 Effect of Competition on Pricing

In the summer of 2015, Ziegler and Love & Company collaborated on a research project to study current trends and practices in CCRC pricing strategies.

To conduct the survey, in June of 2015 an online survey was distributed to CFOs of continuing care retirement communities (CCRCs) throughout the United States. The list of CCRC CFOs was provided by Ziegler and was augmented by additional communities that volunteered to participate in the survey after learning of it through LeadingAge.

By design, the survey was long and took significant time by the communities to compile the requested data. By the end of August, when the online survey was closed, 89 communities had responded. We are grateful for the time and effort put in by those communities, and we hope this information can be of significant use to the senior living field.

The following are characteristics of the communities that participated in the study.

While the study includes a broad spectrum of community types and sizes, it is important to note that findings   nature of the sampling, the results are not statistically projectable to the population of CCRCs as a whole.  As an example of this, one multi-site organization that only offers Type B contracts responded for nine of its communities, resulting in a greater concentration of Type B respondents than actually exists in the field. So when the study reports that 61% of responding communities offer a Type B contract, it cannot be inferred that 61% of all CCRCs offer Type B contracts.

The majority of the communities that responded to the survey (56%) offer multiple contract type options, with many having added new options within the past five to ten years. In this section, we look at the contract types (A, B, C and rental) that communities offer. In the next section, we will look at what options consumers are actually choosing.

Note: Totals are more than 100%, as many communities offer more than one option.

Note: Again, totals are more than 100%, as many organizations offer more than one option.

For most communities, the contract type a consumer selects appears to be influenced more by the community itself than by any type of analytical evaluation by prospects. While many communities have added contract options over the years, and most say they do not have a specific preference for which contract a resident selects, most communities still wind up selling a high proportion of their original contract type.

Because of the wide disparity in contract types and pricing between communities, it would not be meaningful to share the combined number or proportion of each type of contract sold by all responding communities. Instead, to share insights of how consumer choice is affected, we offer examples of contract selection at specific communities, along with insights shared with us by several of the communities. (Communities are not identified to ensure confidentiality.) All data represent the communities’ last three full years of sales.

Other communities of note

While we were unable to speak with this organization to ask any follow-up questions, this is an organization that has grown largely through acquisition over the years. We believe it is a reasonable assumption that purchase patterns at each community reflect the types of contracts with which those communities were originally launched.  

One of the primary goals of this research project was to better identify the relationship between pricing strategies and the consumer’s decision to select a refund option. In this section, we will look at three graphs that illustrate this complex relationship. 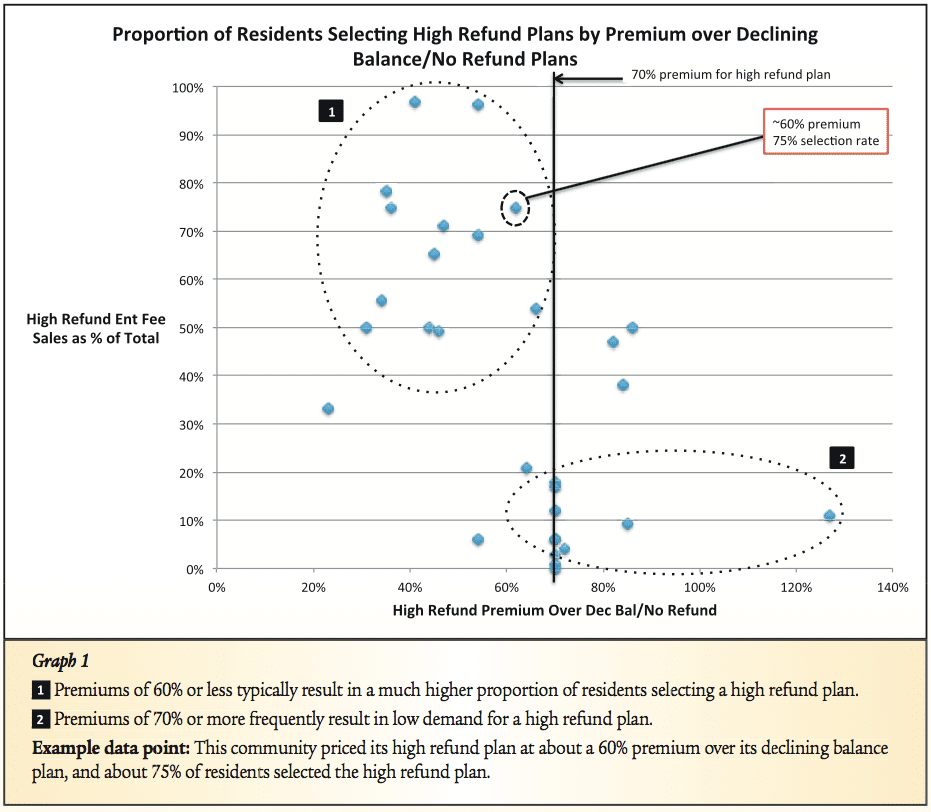 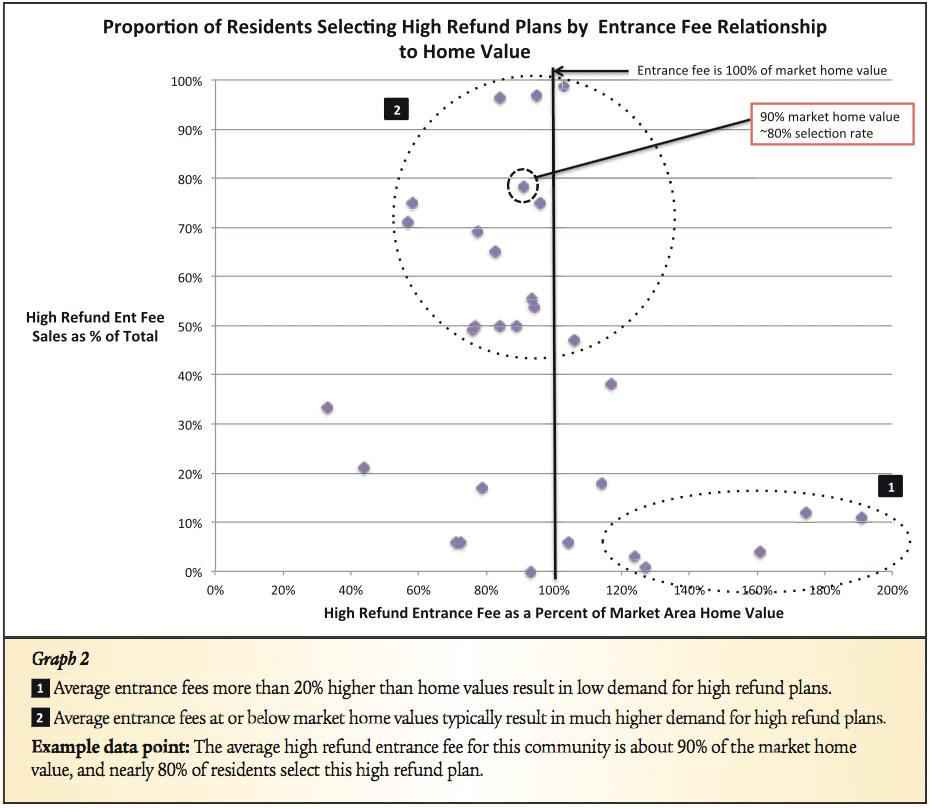 Each of these two graphs, however, have a number of outliers—data points that don’t follow the same relationship as the majority. The reason for this is that both factors—the price premium and the relationship to home values—influence the final choice. Neither is sufficient to look at by itself. 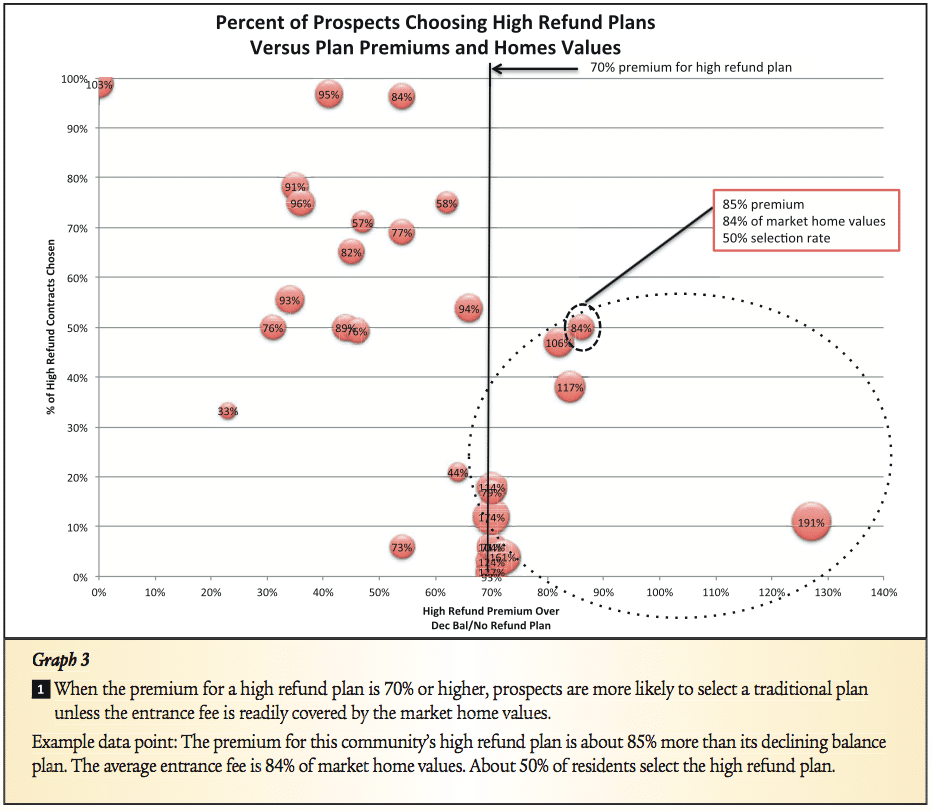 Here’s what this graph tells us:

Effect of Competition on Pricing

The significant majority of responding communities are in highly competitive markets, yet few report that other communities’ pricing has a significant impact on their own pricing strategies.

Yet, despite this high degree of competition, the majority of communities (53%) report that competitors’ pricing only has a moderate influence on their pricing strategies, while only 12% report that competitors’ pricing has a significant influence on their pricing. Of 62 communities that completed this question, only one agreed with the statement, “Competitors’ fees force us to offer lower fees than we feel are appropriate.” The other 61 communities were either neutral, disagreed, or strongly disagreed with that statement.

In addition to exploring specific pricing topics, we also wanted to get a better understanding of how communities are addressing a few service line related issues that are drawing more attention these days.

As part of conducting the study, we asked communities to share basic demographic information about their new residents over the past three full years of sales. As expected, the participating communities represent a wide range of economic profiles of new residents. The following summarizes the findings.

81 communities reported their average age at move-in for new residents. The average age ranged from a low of 70 to a high of 86, with a median of 81.4. The following table shows the distribution of the average ages at move in for the responding communities. 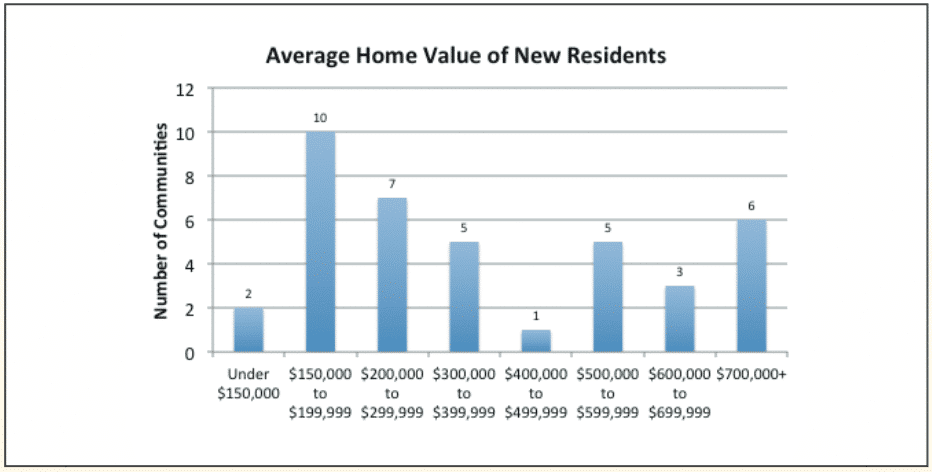 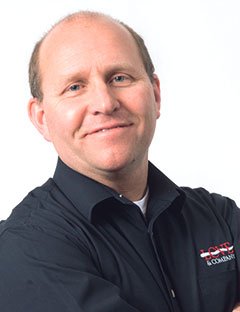  The 2015 pricing research study was led by Rob Love and Jen Adelman of Love & Company, and Lisa McCracken of Ziegler.

We invite you to contact Tim Bracken at 301-663-1239, or tbracken@loveandcompany.com if you would like to learn more about our research or services.