During the past sixteen years, HJ Sims has hosted its Annual Late Winter Conference as a forum to gather experts from across the Senior Living industry. This past year, operators and other professionals convened at the Sheraton Sand Key Resort in beautiful Clearwater Beach, FL for a discussion of ideas, experiences, and strategies.

William (Bill) Pettit, Jr., President and Chief Operating Officer of Merrill Gardens kicked off the discussion by highlighting his organization’s experience in driving successful mixed use developments. In reviewing a survey conducted by A Place for Mom, 85% of independent living consumers, and 66% of assisted living consumers, place importance on being within walking distance of at least one major neighborhood amenity, with a significant percentage of each demographic indicating that this was a “must have” in making their decision on where to live. 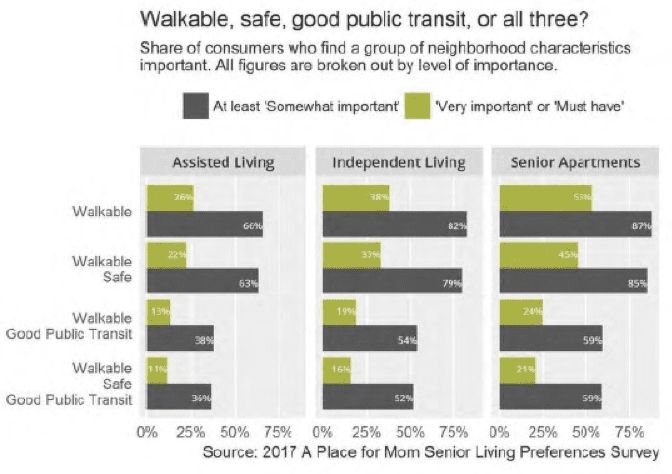 The first community presented by Mr. Pettit was University Village, located in downtown Seattle. The community sits upon a 2.5 acre site that is comprised of 123 dually-licensed independent living/assisted living apartments and 103 market-rate apartments with 22,500 square feet of retail space. The total development cost was $70 million with $55 million financed with tax-exempt financing. The senior living apartments frame one side of the site, while the retail space and market-rate apartments are on the other side of the site; a common courtyard is positioned between the buildings. Mr. Pettit mentioned that the mixture of senior living and market-rate apartments encourages intergenerational interaction – including students of the nearby University of Washington either visiting grandparents or creating friendships with residents of the Merrill Gardens community. Residents and students share meals, and the happy hour at Merrill Gardens was frequented by residents of the market-rate apartment buildings.

Another highlighted project was Merrill Gardens at Burien, a bustling, growing town that boasts a number of prominent companies with national headquarters within 10 to 15 minutes of the community (including Starbucks Coffee, The Port of Seattle, Sea-Tac Airport, Alaska Airlines, REI, Weyerhaeuser, Amazon, Russell Investments, and Nordstrom). An undeveloped two-block area was situated in the town center of Burien, and was a prime location for a mixed-use project located near a town square park, transit center, farmers market and library—all within one block. Merrill Gardens developed Merrill Gardens at Burien for $41 million, including 126 units with a 15-unit memory care wing. At the opening, Merrill Gardens collected 100 deposits and within six months, saw 94% occupancy, which drove more than $2 million in revenue.

Merrill Gardens has repeated these town center successes elsewhere in Washington and California, creating senior living communities adjacent to town amenities, allowing their residents to be within walking distance of at least one major neighborhood amenity. As a result, they have achieved rapid fill-up of new projects and stabilized occupancy earlier than may otherwise have been achievable. They believe that town center development represents an important new opportunity for senior housing. Though it can take more time and potentially increase costs, there are a limited number of opportunities in a particular town creating natural barriers to entry. The popularity of these communities reflect the shifting preferences of today’s seniors who seek to be more connected to their surroundings.

Bill Hagstrom, Vice President of Senior Housing Partners, the development arm of Presbyterian Homes & Services, walked through a case study of their Folkestone Community, located on the shores of Lake Minnetonka in Wayzata, MN. While Senior Housing Partners has developed a number of projects—from strategic planning and product positioning to site selection and zoning and regulatory compliance—the Folkestone project was highlighted in our session to illustrate the nuances of combining a local government’s vision for a particular site and the developer/end user’s vision for the site. The master plan for Folkestone includes 80 condominiums, 36 market-rate apartments, a 115-room boutique motel, 109,000 square feet of retail space and a senior living community that is sponsored by Presbyterian Homes & Services, including a 30-unit care center, a 58-unit assisted living community, enhanced assisted living options, a 17-unit memory care neighborhood, and 148 independent living units.

Residents of Wayzata felt strongly that a significant portion of the development should contain retail space. Initial hopes were that leading big-box retailers would lease the space; however, when that did not come to fruition, the retail targeting strategy shifted to smaller units. Now, the community includes a barber, hair salon, several restaurants, Sotheby’s International Realty, high-end boutiques, a running store, Anthropologie, and a Pilates studio. Additional requirements of the city were that there be sufficient parking to accommodate the mix of residents, retail customers and hotel patrons; thus, the need to develop 250 underground parking stalls. The community also needed to be walkable, even in the harsh MN winters; therefore, a geothermal energy system was implemented to heat and cool the campus. Additionally, the sidewalks and streets are heated in the winter. 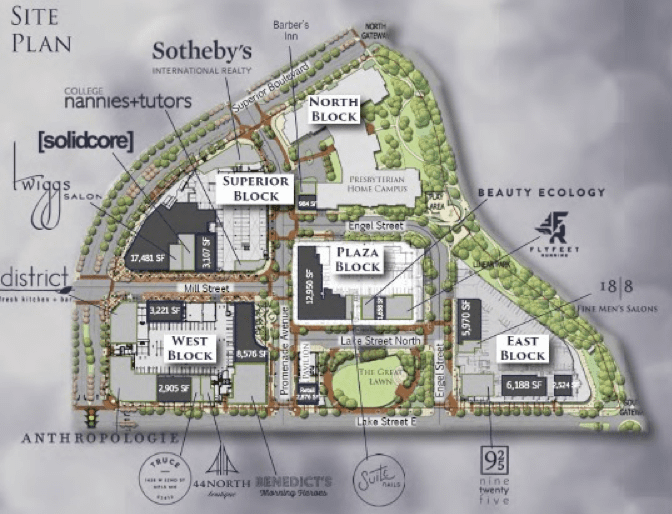 The senior living community at Folkestone is vibrant and well-occupied with occupancy rates for its care center running at more than 92% since its opening in 2015. The assisted living occupancy touts an average occupancy in excess of 96% since opening. Memory care is at 97% occupancy and independent living averages 99% occupancy since opening. Among the lessons learned with the Folkestone community were the need to be careful in making commitments to local jurisdictions, reinforce the focus on the benefits for the community residents, consider service retail over product retail, expect that there will be smaller retail units, plan for parking and, depending on the size of the retail commitment, engage a retail management company.

Our final presenter was Mauricio Diaz, the Director of Strategic Initiatives from The Howard Hughes Corporation, a large mixed use developer in NY, MD, TX, NV and HI, among others. Though Howard Hughes does not presently incorporate senior living in its developments, it has been evaluating the addition of senior living as part of the offerings of its mixed use developments and is eager to offer its perspective on how a large mixed use development can evolve. Diaz provided information regarding its present development, Downtown Columbia in Columbia, Maryland, conveniently located between Baltimore, MD, and Washington, D.C.

Once complete, the new Downtown Columbia will include 4.3 million square feet of office space, 6,250 residential units, 640 hotel rooms and more than 1.25 million square feet of retail space. While there is no senior living community presently contemplated, a community like this would incorporate the walkability requirements for seniors and have a third-party managing the retail space and other development aspects. In developing Downtown Columbia, Howard County maintained significant requirements of Howard Hughes, including incorporating affordable housing, open space and parks, upgraded public infrastructure and structured parking to accommodate a “park-once” approach, allowing visitors to the area to park once and walk within the town center. Important wins for this development included securing Tenable, a publicly traded cybersecurity company, as a flagship tenant that is establishing its world office headquarters at the development, and securing tax increment financing in the amount of more than $48 million to support the costs of the public infrastructure. Through tax-exempt financing, the Maryland Economic Development Corporation issued bonds, the proceeds of which were used to pay for public infrastructure within the development and the debt service of which will be paid from the increased tax revenue received by Howard County. This form of tax-exempt financing is available in nearly all states and should be a consideration in a mixed use development, specifically in areas where significant additional property tax revenue will be generated, public infrastructure is a meaningful part of the development plan, and the development would not otherwise be completed or provide the same level of services and amenities.

From law to finance, Melissa has had a diverse and versatile career. Prior to joining HJ Sims, Melissa practiced law for thirteen years as a principal in the Baltimore and Washington, D. C. offices of Miles & Stockbridge, where she was a member of the firm’s real estate and transactional finance practice. Melissa focused on public and commercial finance with a particular emphasis on real estate, senior living, health care, and economic development.
Melissa is known for anticipating and resolving issues, and for approaching each interaction in her career with an eye towards promoting long-term connections and relationships among parties. Her extensive experience as counsel to banks, issuers, underwriters, developers, and trustees on a wide range of transactions affords her a unique expertise. Read more on the HJ Sims website.